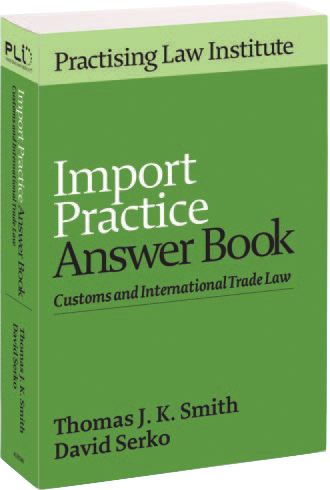 Practice Area: Commercial law, International law, Litigation
Date: Apr 2015 i Other versions can be found in the Related Items tab.
ISBN: 9781402424076
PLI Item #: 135346
“Import Practice Answer Book is a terrific compendium and should be a must-read for anyone entering or practicing in the ever-changing world of customs regulations and international trade law. Serko and Smith have decades of combined experience and their input is invaluable to those who seek answers to the intricate questions that come up when importing merchandise into the United States. It is well written and thought provoking, and delivers clear answers on a complex topic. This book provides knowledge not otherwise found and will be a valuable addition to the library of anyone involved in international trade.”

Thomas J.K. Smith received his B.S. degree in accounting, magna cum laude, from the University of Delaware in 1982 and his J.D. and LL.M. degrees from New York University School of Law in 1985 and 1992, respectively. Tom has practiced customs and international trade law for thirty years, the last twenty-five as a sole practitioner, and has tried numerous cases and argued hundreds of motions and appeals in state and federal courts, including the United States Court of International Trade and the United States Court of Appeals for the Federal Circuit.  Admitted to practice in New York, New Jersey, and the District of Columbia, Tom is also a Certified Public Accountant and a Licensed Customs Broker.