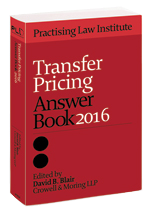 The phenomena of increasingly global business enterprises with valuable intangible property expose companies to transfer pricing enforcement by different countries around the world. Many of these countries are increasingly aggressive in enforcing their local transfer pricing rules, as they attempt to protect their tax revenue base. To avoid double taxation of the same income in this environment, companies often are required to deal with the highly specialized, bilateral treaty-based competent authority process developed to prevent double taxation at a time when trade mainly involved only two established countries. Even more challenging today, companies and tax authorities increasingly are faced with the potential for multiple taxation of the same income, as supply chains cross many borders and as the tax authorities of emerging countries become players in the global taxation process, and the resulting stresses, strains, and limitations of the bilateral treaty-based competent authority process have become more apparent.

In light of the high-dollar risks presented by the increased enforcement efforts of tax authorities worldwide, the complexity of the ever-changing, inherently uncertain transfer pricing standards, and the continually evolving business models of businesses adapting to the constantly changing global economy, companies need practical guidance to permit them to develop and defend their transfer pricing strategies.

Transfer Pricing Answer Book is an invaluable resource for company executives and their advisors who are seeking to better understand this important area of tax law that has become such an important economic facet of so many businesses.

Mr. Blair is an active member and former Chair of the Tax Section of the Federal Bar Association.  He is a member of the ABA Section of Taxation, and a Fellow of the American Bar Foundation.  From 2005 to 2007, Mr. Blair served as an Adjunct Professor of tax at the Georgetown University Law Center.  He frequently speaks on a variety of tax issues and is active in the J. Edgar Murdoch Inns of Court hosted by the United States Tax Court.  Mr. Blair is ranked by The Legal 500 (2007-2011).  Prior to joining Crowell & Moring, Mr. Blair was a Trial Attorney with the United States Department of Justice, Tax Division (1990-1995).  He also served as a Law Clerk for the Hon. Frank M. Johnson, Jr. of the United States Court of Appeals for the Eleventh Circuit.  Mr. Blair received his law degree in 1989 from Cornell Law School (magna cum laude) and his undergraduate degree in 1985 from Georgetown University.