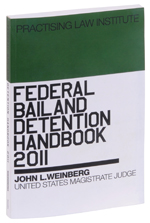 
"The savings in time alone, as you try to prepare for an initial or detention hearing, makes the Handbook a bargain.”
—Defense Magazine

The Bail Reform Act of 1984 and its legislative history are lengthy and complex. Yet all participants—lawyers, judges, and others—are required to understand it thoroughly and apply it swiftly and effectively, often under the pressure of a detention hearing.

The Honorable John L. Weinberg’s Federal Bail and Detention Handbook 2011 provides the busy practicing lawyer or judge with a quick and clear reference to the Act and the relevant statutory language, legislative history and appellate case law.

Judge Weinberg has included “Practice Pointers,” designed to provide defense counsel and Assistant U.S. Attorneys with strategic suggestions for dealing with the Act.  The Handbook’s Table of Cases lists every federal appellate decision of significant precedential value that interprets or applies the Act.

The new paperback format of this 2011 edition has been tailored to help readers find answers in a hurry. Its size permits it to be carried conveniently to and from the courtroom.

Lawyers new to hearings on release and detention in federal court will find the book a useful basic course as well.

Basic Upkeep Service:
In order to keep you abreast of the latest developments in your field, the purchase of PLI treatises includes Basic Upkeep Service, so that supplements, replacement pages and new editions may be shipped to you immediately upon publication for a 30-day examination. This service is cancelable at any time.

The Honorable John L. Weinberg serves as United States Magistrate Judge for the Western District of Washington at Seattle. He received his B.A. degree from Swarthmore College and his J.D. degree from the University of Chicago Law School. He served as a law clerk in the state courts in Illinois and in the United States District Court in Seattle and was in the private practice of law in Seattle for five years before becoming a United States Magistrate in 1973. He served as national president of the National Council of United States Magistrates in 1982–83 and has lectured nationwide on the Bail Reform Act of 1984 at seminars sponsored by the Federal Judicial Center and other organizations. Judge Weinberg was admitted to practice before the courts of Washington and Illinois, and to the United States Court of Appeals for the Ninth Circuit. He has been a member of the American, Washington, and Seattle-King County Bar Associations, and the American Judicature Society. Within the American Bar Association, he has been a member of the Judicial Administration Division and the Criminal Justice Section and served on its Ad Hoc Committee on the Bail Reform Act of 1984.