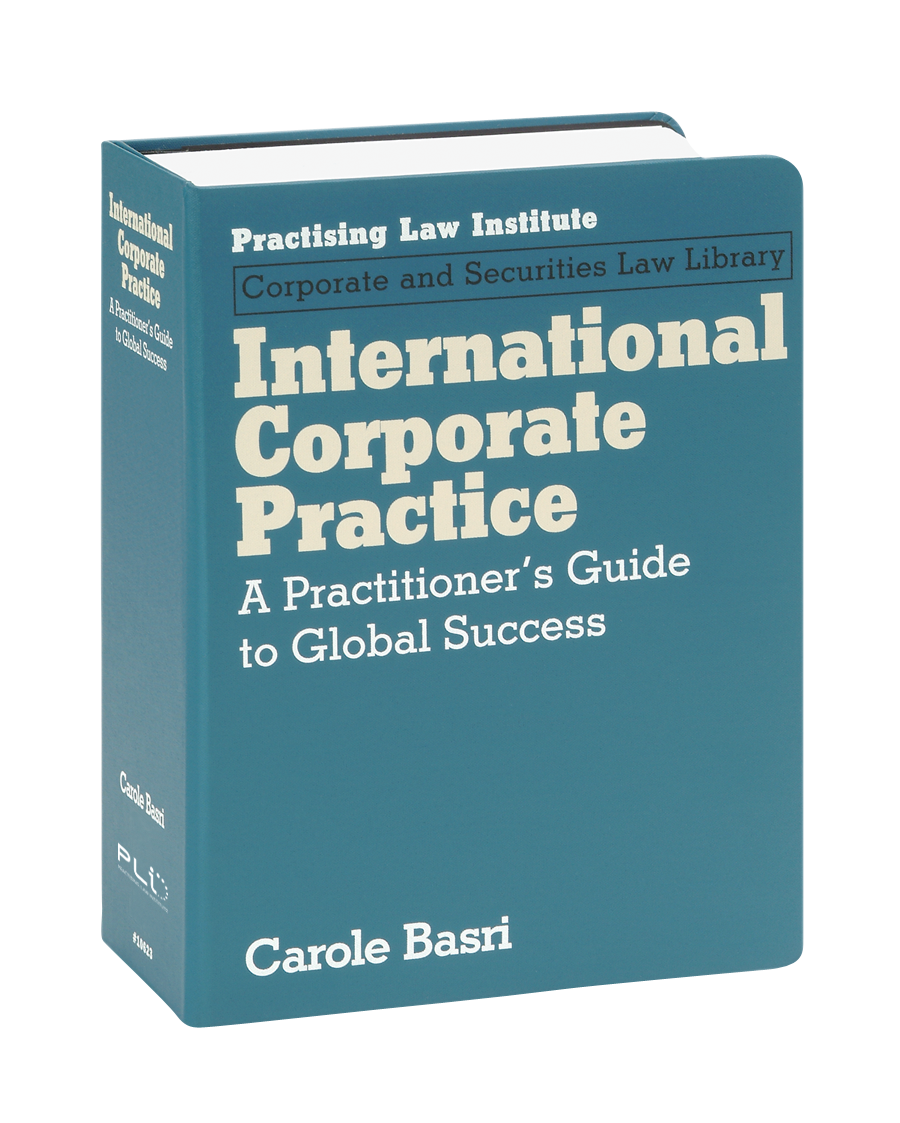 International Corporate Practice provides guidance on building a comprehensive global legal department, including advice on structuring, staffing, and budgeting, as well as the use of foreign legal consultants and outsourcing.

Written by some of the nation’s leading corporate attorneys, International Corporate Practice helps you to:

Carole Basri is the Chief Advisor to the Association of Corporate Counsel In House Counsel Accreditation Program and a visiting professor at Peking University School of Transnational Law. She helped to create the Corporate Compliance program at Fordham Law School, which includes a certificate and LLM in Corporate Compliance that launched in 2012. From 1995 to 2011, she was an adjunct professor of Corporate Law with the University of Pennsylvania Law School and held The Grant Irey Lectureship. She also has been an adjunct professor with New York Law School and Benjamin N. Cardozo Law School. Ms. Basri, a Senior Fulbright Scholar, also was a visiting professor at Hebrew University Law School in March 2008.

Ms. Basri is a graduate of Barnard College and NYU School of Law, where she was a member of its National Moot Court Team. She then joined the Federal Government, where she was an Assistant Counsel with the United States Senate Antitrust and Monopoly Subcommittee and an attorney with the Federal Trade Commission. She later became in-house counsel with the advertising agency, NW Ayer Inc., and left to become an associate, first with Baker & McKenzie and then with Hall Dickler Lawler Kent and Friedman. Ms. Basri then became in-house counsel with Maidenform Inc. and a consultant with the Perrier Group Inc. From 1994 to 2002, she was a consultant to Deloitte & Touche LLP, where she helped to create its Ethics and Compliance practice. During this time, she also served as General Counsel of China On Line Inc.

For ten years, she served as co-chair of the Practicing Law Institute’s Conferences on Corporate Compliance. She has chaired the Ethics for In-House Counsel seminar since 2004, chaired the Global Financial Crisis conference from July 2008 to 2010, and chaired and created the Ethics and Law Department Management Seminar in 2012. She has also been Co-Chair of the Fordham University Law School Corporate Investments Compliance Forum, which was held on April 2, 2012.

From 2010 until 2012, Ms. Basri was a Founder and Senior Vice President of B3 Legal, a national legal and compliance staffing company that provides, among other things, attorneys and compliance professionals to serve as in-house counsel attorneys and Compliance Officers at financial institutions.

Ms. Basri is also President of the Corporate Lawyering Group LLC, which advises on corporate compliance programs. She has created comprehensive compliance and ethics programs for major corporations, including the Dun & Bradstreet Corporation, Cendant, Benjamin Moore & Co. and Dannon Inc. These programs were all launched within nine months and, in many cases, in multiple languages and locations. She also provides advice on law department management, document retention and corporate governance issues. Since the first Corporate Lawyering Accreditation Conference in 1999, the Corporate Lawyering Group has developed conferences and programs on corporate and international law, as well as on ethics. She has served on the Academic Committee of the INTERPOL Anti-Corruption Academy from June 2007 until 2011, where she has worked on creating a curriculum for addressing corporate corruption.

Ms. Basri is co-author of Corporate Legal Departments (4rd edition) published by the PLI, which was translated into Chinese in 2010 by China Free Press, and the editor of International Corporate Practice, published by PLI. She is the co-editor of eDiscovery for Corporate Counsel for West Publishing and the editor of Corporate Compliance Practice Guide: The Next Generation of Compliance, which was published by Lexis Nexis in 2009. She is also the editor of three PLI Handbooks on the Global Financial Crisis published from 2008 to 2010 and the PLI handbook Ethics and Law Department in 2012. She received the 2001 Lexis Nexis/ Corporate Legal Times Leadership Award and was the keynote moderator at the LegalTech West Coast Conference in June 2009 in Los Angeles, CA.

In 2003, Ms. Basri was a member of the US State Department’s “Future of Iraq” Project. From July 2003 until July 2004, she was a member for the Coalition Provisional Authority, with the Iraqi Reconstruction Development Council (IRDC) for Ambassador Bremer in Baghdad. She worked extensively on doing business, anti-corruption, and transparency issues in Iraq. She helped draft legislation on these issues and met with all of the Ministries in Iraq. She created the “Doing Business Conference in Iraq” at the Union League in New York on December 9, 2003 and, in September 2004, she led a conference in Baghdad on transparency and anti-corruption in Iraq, where she advised the Iraqi Ministry of Health. In September 2004, she worked with the Iraqi Ministry of Health and the Iraqi Red Crescent on health and legal issues. In September 2005, she was asked by Iraqi Prime Minister Jaafari to represent the Iraqi government in finding law firms and accounting firms to represent the Iraqi government in bringing Oil for Food litigation, and she was instrumental in obtaining the Oil for Food documents from the Iraqi Board of Supreme Auditors for the UN Commission on Oil for Food headed by Paul Volcker.

In March 2005, Ms. Basri spoke at Cairo University School of Law on anti-corruption at a conference for Chief Judges and Appellate Judges from Afghanistan, Iraq, Palestine and Egypt on anti-corruption protocols. Similarly, in April 2005, she spoke on anti-corruption strategies at the Dead Sea in Jordan at a conference for 150 Iraqi women leaders sponsored by the Defense of Democracy and the U.S. State Department. In July 2005, she spoke at the Iraqi Constitutional Convention in Southfield, Michigan, with a direct hook-up to Iraq, on constitutional issues. In October 2005, she met with Iraqi women leaders at the U.S. State Department to discuss leadership issues in the December 15, 2005 election. In March 2006, Ms. Basri worked in Baghdad with the Woman’s Alliance for Iraq Democracy and the Global Justice Center on gender crimes training for the Iraqi Tribunal Judges on Saddam Hussein’s case and, in November 2006, at the Dead Sea in Jordan, for a four-day conference, she continued this gender training for Iraqi tribunal judges. Ultimately, this work was used by the judges in the Anfal case. In January 2008, Ms. Basri spoke at the Harvard Kennedy School on Iraqi women’s issues and anti-corruption protocols. In November 2008, she spoke at a conference sponsored by the Konrad-Adenauer Foundation in Berlin, Germany on International Law and the Middle East. In July 2009, she delivered lectures on women’s rights, anti-corruption and leadership at the Iraq Studies Institute in Beirut, Lebanon.

Ms. Basri is also a documentary film producer and her films have been shown at film festivals and PBS. Recently, she produced a documentary on hemophiliacs in Iraq who got AIDS through tainted blood parts. She has advised, on a pro bono basis, a preparatory PBS production of Saddam’s trial. She has been a commentator on the Iraqi elections and its constitution for MSNBC, CNN, FOX and Al Iraqiya TV.