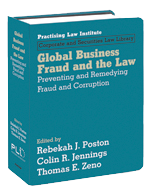 Global Business Fraud and the Law: Preventing and Remedying Fraud and Corruption

Global Business Fraud and the Law: Preventing and Remedying Fraud and Corruption is a nuts and bolts guide to preventing business fraud and corruption, and remedying unlawful behavior should it occur.

Whether running a company that operates across international borders or providing legal counsel to such a company, this book provides invaluable guidance from expert practitioners from around the globe. The authors are seasoned and experienced white collar criminal and civil defense practitioners who write from personal experience.

Part I of the book explores the practical aspects of global compliance issues and the potential for internal investigations that organizations and individuals engaged in international commerce may confront. It covers topics such as:

Part II provides country-specific practice guides to the law of business fraud and corruption for several countries key to global commerce, including Russia, China, and Brazil, among others.
Please click here to view the latest update information for this title: Last Update Information

REBEKAH J. POSTON is a partner at Squire Patton Boggs and heads the firm’s global FCPA/anticorruption and compliance team consisting of more than fifty partners and associates located throughout the United States, Latin America, Asia Pacific, Europe and the Middle East. She focuses her practice on defending complex domestic and international white collar criminal cases.

Ms. Poston previously served as an Assistant U.S. Attorney with the U.S. Attorney’s Office in Miami, Florida and as a Special Attorney with the Department of Justice’s Organized Crime and Racketeering Section in Cleveland, Ohio. She has successfully represented multinational, public and private corporations, brokerage firms and banks, airlines and shipping lines, maritime brokers, medical device and pharmaceutical companies and industrial manufacturing and agricultural companies, as well as their officers, directors and employees. Ms. Poston has counseled and defended on matters involving a wide range of issues including the Foreign Corrupt Practices Act (FCPA), the USA PATRIOT Act, money laundering, environmental crime, Internet fraud and identity theft, tax evasion, bank, securities and tax fraud, customs and embargo violations, asset seizures, forfeitures and healthcare fraud and abuse. She has written FCPA corporate compliance programs and conducted FCPA trainings, audits and internal investigations for Fortune 100 and 500 companies around the globe.

In 2010, Ms. Poston was inducted as a Fellow into the American Bar Foundation. An authority on white collar criminal defense, Ms. Poston was named to Who’s Who Legal 100 (2014) as one of the world’s top lawyers in the area of Business Crime Defense. She is consistently named as one of Florida’s Super Lawyers in her field, a ranking that places her among the top 5% of all Florida’s lawyers. She also has been listed each year in The Best Lawyers in America since 2003, named as one of Florida’s Legal Elite by Florida Trend magazine each year since 2004, and is regularly listed in South Florida Legal Guide as one of South Florida’s leading lawyers in her field of white collar criminal defense. In 2010, she was selected by South Florida’s Legal Guide as one of eight women lawyers who had excelled in their legal careers.

COLIN R. JENNINGS is a partner in Squire Patton Boggs’ White Collar and Investiga-tions practice group. His trial practice focuses on complex civil and criminal matters, including responses to governmental investigations and enforcement actions. As a natural extension of his litigation practice, Colin has an active global compliance and data breach response practice. He has appeared in courts throughout the United States, and has successfully tried numerous civil and criminal matters in various federal and state courts.

Colin’s criminal practice involves representing public and private corporations and business professionals in response to federal, state and local criminal investigations. Throughout the United States and globally, he conducts internal investigations into allegations of employee misconduct, fraud or other business crimes including the Foreign Corrupt Practices Act, OFAC sanctions and cybercrimes.

In addition, Colin has diverse and extensive experience in complex civil litigation including matters related to tort claims, insurance and coverage matters, contract and other commercial disputes, RICO, fraud and abuse, and trade secret litigation. He also has expertise in connection with the defense and prosecution of civil and admin-istrative matters involving allegations of fraud and criminal conduct.

Building on his experience in both civil and criminal matters, Colin regularly advises U.S. and global companies on the design, implementation and assessment of compliance programs. He has been selected by several publicly held companies, in-cluding Newell Rubbermaid, as the primary outside counsel providing legal assistance on global compliance matters.

Colin is often asked to speak about compliance, and is the author of numerous articles and chapters on the topic. Colin serves as the leader of the firm’s data privacy and protection litigation sub-group, having responded to clients’ crises in the United States and internationally. He regularly interacts with federal, state and international authorities concerning data breaches, and coordinates the forensic analysis and resulting claims or litigation that inevitably follow a breach.

THOMAS E. ZENO is Of Counsel in the Government Enforcement, Investigations and Global Compliance practice of Squire Patton Boggs. Before joining the firm, Tom served for more than twenty-five years as an Assistant United States Attorney in the District of Columbia. During that time, Tom investigated and prosecuted economic crimes involving healthcare, financial institutions, credit cards, computers, identity theft and copyrighted materials. As the office’s Health Care Fraud Coordinator for the last eight years, Tom supervised investigation strategies of agents from the Federal Bureau of Investigation, the Department of Health and Human Services, the Drug Enforcement Administration and the Medicaid Fraud Control Unit regarding healthcare offenses. He also served as the liaison with the office’s civil division on joint proceedings.

Since joining the firm, Tom has counseled and defended organizations and indi-viduals facing government investigations. Notable successful resolutions include securing declinations and dismissals of federal qui tam investigations on behalf of a physician-owned joint venture and on behalf of a federal contractor of airplane parts. Tom also secured dismissal of more than forty felony charges and return of all per-sonal funds that had been seized in the largest case of its kind in Florida, involving RICO violations, money laundering and illegal possession of slot machines following an investigation that lead to the resignation of the Florida Lieutenant Governor.

Tom’s significant prosecutions include the conviction of five codefendants accused of defrauding an integrated managed care consortium and the criminal portion of a global settlement by a pharmaceutical company for off-label marketing. Tom also has been involved in highly publicized matters including hearings related to the conditions of release for John Hinckley, Jr., attempted presidential assassin, and the prosecution of government officials. Tom received commendations and special achievement awards including the Harold J. Sullivan Award, the highest award presented annually by the Assistant United States Attorneys’ Association for career excellence. Tom also was awarded the Inspector General’s Integrity Award from the Department of Health and Human Services for his outstanding contributions in healthcare fraud investigations. As an adjunct professor at Georgetown University for eight years, Tom instructed student prosecutors in trial skills for the Criminal Justice Clinic.