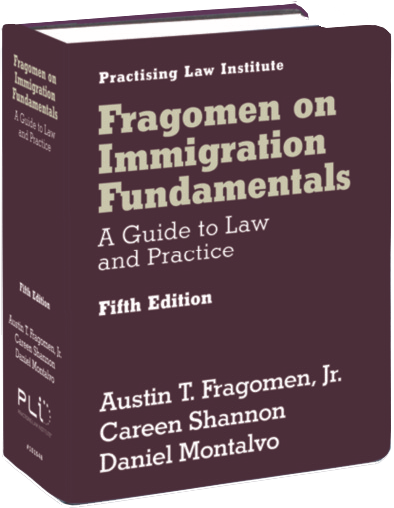 Fragomen on Immigration Fundamentals: A Guide to Law and Practice (Fifth Edition)

Fragomen on Immigration Fundamentals provides in-depth coverage of the rules, policies, and procedures related to key facets of immigration law in the United States, including:

Throughout, the authors supplement analysis of recent cases, policies and rules with practical guidance for both general practitioners and experienced immigration attorneys.

Austin T. Fragomen, Jr. is Chairman of the global law firm of Fragomen Worldwide. Over the course of his career in immigration, Austin has served as staff counsel to the US House of Representatives subcommittee on immigration, citizenship and international law and as an adjunct professor of law at New York University School of Law and as Chairman of the New York City Bar Justice Center.  Austin has testified before Congress on a range of immigration issues.  He serves as Chairman, Business Mechanism, Global Forum Migration and Development; and has also participated as a panelist at multi-stakeholder hearings on the Global Compact on Migration at the United Nations.

Austin is also the founding co-author of a renowned series of immigration handbooks that provide information on the best practices and latest developments in the field of business immigration, published by Thomson Reuters/West. He is vice chairman of the board of directors of the Center for Migration Studies; editorial board member of the International Migration Review; chairman of the board of directors of the Council on Global Immigration; co-author of the Practising Law Institute's Immigration Fundamentals; distinguished author, Thomson Reuters/West, Member of the Board, Jesuit Refugee Service(JRS), Member Advisory Board, Institute for the Study of International Migration, Georgetown University and fellow, American Bar Foundation.

Careen Shannon is a Partner based in Fragomen’s New York office. Prior to joining the firm in 1998, Careen was a Pro Se Law Clerk at the U.S. Court of Appeals for the Second Circuit; a Staff Attorney at The Legal Aid Society (Juvenile Rights Division); an attorney in private practice (focusing on immigration law and family law); and a Legal Editor of immigration publications at Matthew Bender & Co.

A frequent speaker and writer, Careen has spoken before numerous bar associations, professional organizations and human resources groups, and has written countless articles on immigration law topics for a variety of legal and human resources publications. She is the co-author, with Austin T. Fragomen, Jr. and Daniel Montalvo, of a number of legal handbooks published by Thomson Reuters/West and the Practising Law Institute.

Careen is one of the leaders of the firm’s pro bono practice, and in 2014 she launched the U.S. firm’s nationwide effort to provide pro bono legal services to unaccompanied minors and to detained immigrant women and children from Central America. She has served as a volunteer pro bono attorney in the AILA Artesia Pro Bono Project, and the CARA Family Detention Pro Bono Project, representing detained asylum-seeking immigrant women in bond hearings and credible fear interviews. In the past, she obtained political asylum for a student leader from the Ivory Coast who had been persecuted for protesting against the government. She worked pro bono to secure entry into the U.S. on a humanitarian basis of the foreign-born children of a victim of the September 11, 2001 attacks on the World Trade Center and assisted the battered immigrant spouse of a U.S. citizen in self-petitioning for permanent residence. Careen also participated in the New York City Bar Justice Center’s Know Your Rights initiative to advise detained immigrants. She is a long-standing member of the Study Group on Immigrant Representation (convened by Chief Judge Robert A. Katzmann of the U.S. Court of Appeals for the Second Circuit), which has spearheaded numerous initiatives aimed at increasing access to counsel for indigent immigrants in the United States.

Daniel Montalvo is a graduate of Columbia University (B.A. 1986) and Brooklyn Law School (J.D. 1993). He is admitted to the bar in New York and is a member of the American Immigration Lawyers Association. In addition to being a co-author of Fragomen on Immigration Fundamentals, Mr. Montalvo is the co-author of a series of well-renowned handbooks and treatises on employment-based immigration law and compliance published by Thomson Reuters/ West. Montalvo has also served as a director of immigration clinics affiliated with the United Methodist Church in New York City.