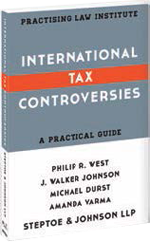 With the U.S. Justice Department taking an ever-closer look at cross-border transactions and their tax implications, the new International Tax Controversies: A Practical Guide provides a detailed roadmap to how to prepare for a tax audit that involves an international component. Creating and retaining the proper transaction-related documentation, and understanding what additional documentation might be needed for an international examination, is vital to a successful audit.

International Tax Controversies describes the process of how an international audit proceeds, including providing information on:

In international tax situations, there are often conflicting positions taken by the U.S. Internal Review Service and a non-U.S. tax authority. Tax treaties containing mutual agreement procedures (MAPs) are often invoked to protect the taxpayer from paying double taxes. International Tax Controversies describes the process by which MAPs may be invoked and a binding resolution created.

As most disagreements between international taxing entities involve transfer pricing issues, there is generally an opportunity to obtain an advance pricing agreement (APA) to protect the taxpayer. International Tax Controversies analyzes the APA process, providing a detailed guide on facilitating the process for your client. It also describes the many tax information exchange treaties and agreements that the U.S. has entered into, and the impact they have had on the U.S. taxpayer.

PHILIP R. WEST is the chairman of Steptoe & Johnson LLP and head of the firm’s tax practice. He is one of the premier international tax lawyers in the country and is consistently ranked among the best tax practitioners in publications such as Chambers USA, Chambers Global, and the Legal 500. Focused mainly on international tax issues for both domestic and foreign clients, Mr. West helps clients favorably resolve controversies with, and obtain rulings and other favorable guidance from, the IRS, Treasury, and the Department of Justice. Mr. West also has extensive practical experience advising on international business operations and transactions, with deep substantive knowledge of income deferral, foreign tax credits, transfer pricing, tax treaties, tax withholding and reporting, and the tax aspects of crossborder mergers, acquisitions, joint ventures, investment funds, and financings. Mr. West served for nearly four years as the Treasury Department’s International Tax Counsel, the senior international tax lawyer in the U.S. government. In that position, he played a central role in virtually every policy, legislative, and regulatory development in the international tax area and led tax treaty negotiations, discussions, and ratification efforts involving countries throughout the world. Earlier in his career, Mr. West litigated tax cases with the Justice Department, advised Judge Carolyn Miller Parr as a Tax Court clerk, and practiced both with a Wall Street law firm and in the national office of an international accounting firm.

J. WALKER JOHNSON is a partner in the Washington, D.C. office of Steptoe & Johnson LLP. At Steptoe, Mr. Johnson’s practice focuses on tax controversies and tax litigation. He has litigated numerous cases in district court, the Tax Court and the Court of Federal Claims, as well as in various Circuit Courts of Appeals and the U.S. Supreme Court. Prior to joining Steptoe, he was a Trial Attorney at the Department of Justice’s Tax Division, where he was awarded the Tax Division’s Outstanding Attorney Award. Mr. Johnson’s practice has involved not only transfer pricing, but also the taxation of insurance companies and other financial institutions. Since 1987, he has served as an Adjunct Professor of Law in the Graduate Tax Program at the Georgetown University Law Center, teaching a course titled Taxation of Financial Institutions and Products. He is consistently recommended for tax controversy in Chambers USA, Legal 500 US, and Lawyers in America.

Michael C. Durst is an attorney in private practice in Washington, D.C., and also serves as Special Counsel to Steptoe & Johnson LLP. He is a former director of the IRS’s advance rulings program in transfer pricing matters, the Advance Pricing Agreement Program. His current practice involves planning, compliance, and defense in tax controversies.

Amanda Varma advises multinational businesses, family offices, and high-net-worth individuals on US federal income tax matters, with particular focus on international tax planning and controversies. She counsels both US- and foreign-owned businesses across a variety of industries, regularly advising on the US tax consequences of cross-border investments, reorganizations, business restructurings, acquisitions, and financings.

Amanda is an Adjunct Professor of Law in the Graduate Tax Program at the Georgetown University Law Center, where she teaches US International Inbound Tax, a course focusing on the US taxation of foreign persons investing in the United States.

Amanda is the chair of Steptoe's Women's Forum, which is devoted to connecting, developing, and supporting Steptoe's women professionals.