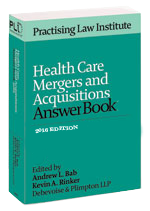 Organized into four parts, Health Care Mergers and Acquisitions Answer Book, includes practical advice, in a question-and-answer format, on how to address the various industry-specific issues that arise in health care acquisitions:

Andrew Bab is a corporate partner and a member of the firm’s Mergers & Acquisitions, Private Equity and Healthcare Groups. Mr. Bab has worked extensively on public and private acquisitions, divestitures and joint ventures, including cross-border transactions for both private equity and corporate clients, as well as licensing arrangements and other corporate transactions. He has experience across many industries, but is particularly active in the healthcare sector. In addition, he frequently advises Deutsche Bank, Guggenheim Securities, J.P. Morgan Securities, Morgan Stanley and other investment banks on major M&A transactions.

Mr. Bab is recognized for M&A and private equity buyouts by The Legal 500 US (2015-2016), where he is described as a “leader in healthcare transactions.” Clients have referred to him as “one of the sharpest legal minds [they] have ever worked with” and have noted that “[h]e consistently impresses with his legal and business instincts.” He is named as one of the 500 leading lawyers in America by Lawdragon (2016) and is also recognized as a leading M&A lawyer by Best Lawyers (2016).

Mr. Bab has written prolifically on a variety of M&A and corporate governance-related topics. He is the co-editor of and contributor to the annual Health Care Mergers and Acquisitions Answer Book (Practising Law Institute, 2016), an extensive reference guide addressing structuring, regulatory, due diligence and documentation issues, among other things, in healthcare M&A and licensing deals. He is the co-author of “Lot Of Inversion Talk, But Do You Know the Basics?” Law360 (2014), author of “Got Financing? You May Have to Extend Your Tender Offer,” The Harvard Law School Forum on Corporate Governance and Financial Regulation (2013); “Contingent Value Rights in Healthcare M&A,” Insights (2011); “Poison Pills,” The Harvard Law School Forum on Corporate Governance and Financial Regulation (2011); “A New Worry,” IR Magazine (2008); and co-author of “Soft Dollars and Other Means of Obtaining Business,” a chapter in the Practising Law Institute treatise Broker-Dealer Regulation (2008); “SEC Proposes Amendments to Cross-Border Tender and Exchange Offer and Business Combination Rules,” BNA Securities Regulation & Law (2008); “Tender Offers: Back in Business,” Corporate Governance (2007); and “Gun Jumping Case vs. Qualcomm Shows Risks for Betrothed Companies,” Corporate Governance (2006). Mr. Bab is the author of “Contingent Value Rights,” Insights (2001) and the co-author of several articles published in The Deal, including “The Revlon Standard” (2007), “Booby Traps” (2003) and “Nerve Tonic” (2003). Mr. Bab is also a frequent speaker on legal developments affecting mergers and acquisitions and on healthcare-related issues.


Kevin A. Rinker is a corporate partner of Debevoise & Plimpton LLP, co-head of the firm’s Health Care & Life Sciences Group, and a member of the Mergers & Acquisitions and Private Equity Groups. Mr. Rinker has a broad-based transactional practice with extensive experience advising multinational corporations and private equity firms in structuring and negotiating mergers, acquisitions, divestitures, licensing arrangements, and other corporate transactions. He has handled matters across many industries, but has a particular focus in the health care, media, and technology sectors. Mr. Rinker is recommended as a leading M&A lawyer by Chambers USA and by IFLR1000, and is also recognized by The Legal 500, where clients describe him as “commercial,” “extremely client oriented,” and “calm under fire.” He is a frequent author and speaker on legal developments affecting mergers and acquisitions, and is an editor of the Debevoise & Plimpton Private Equity Report. He recently co-authored “MAC Clauses in the U.K. and U.S.: Much Ado About Nothing?,” in The M&A Lawyer (2014), and “Imitation is the Sincerest Form of Flattery: Continued Use of Private Equity Technology in Acquisitions by Strategic Buyers,” also in The M&A Lawyer (2013). Mr. Rinker joined Debevoise in 2000 and became a partner in 2007. He received his B.A. from Tufts University in 1994 and his J.D. from the Georgetown University Law Center in 1999, where he was on the editorial board of The Tax Lawyer and served as a Teaching Fellow in the LL.M. program. Mr. Rinker is a member of the Board of Directors of Partnership with Children, a nonprofit organization that assists at-risk youths in the New York City area.