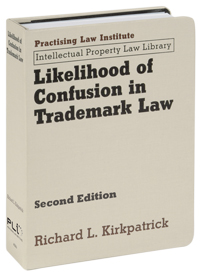 Practice Area: Intellectual property, Likelihood of confusion, Litigation, Trademark litigation, Trademarks
Published: May 2013
Supplement Date: Nov 2021 i Other versions can be found in the Related Items tab.
ISBN: 9781402420191
PLI Item #: 46331
The second edition of Likelihood of Confusion in Trademark Law illuminates the pivotal multiple-factor test, giving you a strong grasp of the key elements used by the courts to determine if likelihood of confusion exists. It’s packed with hundreds of real-world examples that help to spotlight the kinds of trademarks that are likely to be confused with established trademarks, and those that are not. Included are effective, trial-tested strategies and tips on how to outmaneuver your opponent in court, whatever side you represent. To further aid your understanding, the treatise includes an appendix of color illustrations of marks from trade dress infringement cases.

Updated with every relevant U.S. Court of Appeals decision, Likelihood of Confusion in Trademark Law, Second Edition is a must-have reference for trademark specialists and other intellectual property attorneys, and important reading for corporate counsel, generalists, and corporate executives.

Mr. Kirkpatrick has focused on trademark and unfair competition law since 1980. His practice covers the full range of trademark protection and practice, including counseling; licensing; due diligence and other opinions on trademark aspects of initial public offerings, asset purchases, secured transactions, taxation and intellectual property holding companies; trademark enforcement and defense; litigations before the U.S.
Trademark Trial and Appeal Board and courts; trademark clearance and registration worldwide; and trademark portfolio management. He is the leader of Pillsbury's International Trademark Team.

Mr. Kirkpatrick is the author of the leading treatise: "Likelihood of Confusion in Trademark Law," published by Practicing Law Institute with semi-annual supplements, also available from Lexis and Kindle. He has also published numerous articles on trademark topics, detailed below. This is the 28th supplement to the treatise, which was first published in 1996.

The World Trademark Review 1000 described Mr. Kirkpatrick as an “outstanding prosecution and strategy authority who serves an eminent clientele, including household names in retail, food and drink and sporting goods.”

State of California
District of Columbia