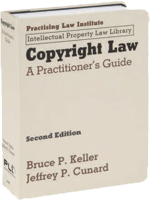 Written by two nationally recognized lawyers who have litigated major copyright cases, including those involving digital forms of communication, Copyright Law: A Practitioner’s Guide, Second Edition, helps you to:

Copyright Law: A Practitioner’s Guide provides up-to-date analysis of court decisions and practical advice for the protection of copyrights. The book also includes a useful detailed flowchart using an actual case result to illustrate how damages and profits are calculated.

Bruce Keller has been an Assistant United States Attorney for the District of New Jersey since 2015 and currently serves as Special Counsel to the U. S. Attorney.  In addition to his caseload, he helps oversee major prosecutions, policy issues and other matters for the Office.

During his tenure, Bruce has been responsible for various appeals including:

Before that, he led the intellectual property litigation practice at Debevoise & Plimpton LLP where litigated a number of widely-publicized cases on behalf of:

Mr. Keller is the co-author of two treatises.  The first, with Jeffrey Cunard, is Copyright Law: A Practitioner’s Guide (Second Edition, 2015, supplement forthcoming 2018), published by Practising Law Institute.  The second, The Law of Advertising, Marketing and Promotions (Law Journal Press 2011), was written with David Bernstein, a partner at Debevoise & Plimpton.

Mr. Keller, along with Mr. Cunard, also taught at Harvard Law School and was a Fellow at its Berkman Center for Internet and Society.  In May 2008, both received the Berkman Award, the Center’s highest honor, for their pro bono service as lawyers, educators and co-directors of the Center’s clinical program.

He also was an Advisor to the American Law Institute’s Restatement of the Law: Unfair Competition, and is a member of the Advisory Boards of BNA’s Patent, Copyright and Trademark Journal, the Advertising Compliance Service and The Entertainment Law Reporter, among others.  He has been Counsel to the International Trademark Association (“INTA”), including in connection with the INTA’s amicus brief in the landmark Taco Cabana trade dress case.

Jeffrey Cunard, managing partner of the Washington, D.C. office, leads the firm’s corporate intellectual property, information technology and e-commerce practices. He has broad experience in transactions, including software and technology licenses, joint ventures, mergers and acquisitions, and outsourcing  arrangements. He is an internationally recognized practitioner in the field of the Internet and cyberlaw and a member of the firm’s Privacy and Data Security practice. Mr. Cunard’s practice also encompasses copyright litigation, U.S. and international media and telecommunications law, including privatizations and regulatory advice.

Mr. Cunard is the author of, and contributes to, books and articles on communications and intellectual property law, and he speaks widely on both subjects. He is on the Board of Editors of e-commerce Law & Strategy and is the co-author of two seminal books on international communications law, From Telecommunications to Electronic Services (1986) and The Telecom Mosaic (1988), both published by Butterworths. He also co-authors the treatise, Copyright Law: A Practitioner’s Guide (2001-2014), published by Practising Law Institute, and has co-authored the “Obscenity and Indecency,” “Copyright” and “Trademark and Unfair Competition Issues” chapters in Internet and Online Law (K. Stuckey, ed.) (Law Journal Seminars-Press 1999-2010).  Annually, Mr.Cunard co-authors a summary of legal developments involving intellectual property and the Internet for the Practising Law Institute’s Communications Law program. He also is a major contributor to The Future of Software (1995), published by MIT Press. For several years, he taught a seminar at Harvard Law School, “Practical Lawyering: Internet-Related Issues,” and served as co-director of the Clinical Program at the Berkman Center for Internet & Society at Harvard University.

Mr. Cunard is an active participant in community activities and the arts. He is a member of the Board of Trustees of the Freer Gallery of Art/Arthur M. Sackler Gallery, Smithsonian Institution (Chair, 2003-2007; Vice Chair, 2010-present); serves as Secretary of and is on the Board of Directors of Friends of Khmer Culture; and is Counsel to the College Art Association. He is a past President of the Woolly Mammoth Theatre Company and a past director of both Rhizome.org and the Choral Arts Society of Washington.