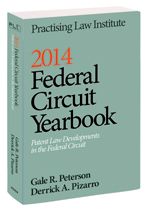 Practice Area: Intellectual property, Litigation, Patent litigation, Patents
Date: Aug 2014 i Other versions can be found in the Related Items tab.
ISBN: 9781402422584
PLI Item #: 55424
An essential resource for every patent practitioner, the 2014 Federal Circuit Yearbook: Patent Law Developments in the Federal Circuit is the easy, effective, and economical way for you to keep pace with all patent decisions published by the U.S. Court of Appeals for the Federal Circuit during the past year.

In each edition, the Yearbook’s concise yet comprehensive case synopses zero in on the prime issues, providing you with an expert account of the facts and law of the key rulings in the field. Covering everything from utility to claim construction, nonobviousness to infringement, and inequitable conduct to inventorship, the Yearbook brings you readily accessible summaries packed with authoritative commentary on the CAFC’s legal analyses and its current thinking on pivotal patent concerns. The Yearbook keeps you informed while keeping scientific and legal terminology to a minimum, explaining issues in a way that provides you with the practical legal support you need.

Revised annually, PLI’s 2014 Federal Circuit Yearbook is must reading for patent attorneys and other intellectual property practitioners, as well as a useful reference for corporate attorneys and inventors.
Please click here to view the latest update information for this title: Last Update Information

Gale R. “Pete” Peterson, a former Technical Advisor to Chief Judge Howard Markey of the U.S. Court of Customs and Patent Appeals, now the U.S. Court of Appeals for the Federal Circuit, and also a former patent examiner, has more than 35 years of experience in intellectual property litigation, prosecution, licensing and acquisition. Pete has served as a court-appointed special master or technical advisor to courts throughout the U.S. in more than 65 diverse cases covering a wide range of technologies from communications to pharmaceuticals, both overseeing discovery and deciding claim construction, and, in one case, conducting trial-on-the-merits.  Pete has also served as arbitrator or mediator in more than 25 cases, and as an expert witness in some 30 cases.

Before beginning his current practice serving as a “neutral” in IP litigation, and a consultant in IP litigation and strategy, Pete served as senior shareholder in the intellectual property law department of Cox Smith in San Antonio, TX. for 35 + years.  Pete provided litigation and transactional representation to emerging and established technology-based and research-oriented companies in intellectual property, information technology, e-commerce, and related unfair competition law. He represented clients in obtaining and enforcing domestic and international patent, trademark/trade dress, domain name, copyright, and trade secret protection, as well as defending clients charged with infringing those rights. That representation included covenants-not-to-compete and other restrictive covenants. Pete represented clients in litigation, as well as domestic and international technology acquisition and licensing.   Pete served as a patent examiner in the U.S. Patent and Trademark Office, including serving as law clerk to the PTO Board of Appeals.  Pete further served as Technical Advisor to Chief Judge Markey of the U.S. Court of Customs and Patent Appeals, now the U.S. Court of Appeals for the Federal Circuit.

He received his J.D. magna cum laude from the University of Baltimore School of Law in 1975, and he received his LL.M in Trade Regulation Law (with highest honors) from George Washington University in 1978. Pete, among other positions, is past President of the Society of International Business Fellows, Southwest Chapter, and currently serves on the Board of SIBF, past Chairman of the Intellectual Property Law Section of the State Bar of Texas, and currently serves in leadership roles for the American Bar Association. Pete is also a member of the Féderation Internationale des Conseils Propriété Industrielle, the Licensing Executive Society, the American Intellectual Property Law Association, the International Trademark Association, and other professional organizations. He has been selected as a “Texas Super Lawyer” since 2003 by Texas Monthly, was selected for “Chambers USA America’s Leading Business Lawyers” 2003-05, and has been selected in “The Best Lawyers in America” since 1991. Pete has taught the Patent Resources Group’s course on Federal Circuit law since 1989.

DERRICK A. PIZARRO advises clients in procuring, enforcing and commercializing intellectual property rights in a variety of industries.   Mr. Pizarro has counseled clients ranging from venture-backed startups to mature, publicly-traded companies with respect to both transactional and litigation matters.  Before founding the The Pizarro Firm, Mr. Pizarro served as a shareholder in the intellectual property law department of Cox Smith Matthews Incorporated in San Antonio, Texas.  Mr. Pizarro is licensed to practice before the United States Patent and Trademark Office. Mr. Pizarro holds a degree in mechanical engineering from the University of Texas at San Antonio and a law degree from Baylor University.